Public art displays are a great way to show off local talent, keep the arts alive, and inspire the community. Without it, our cities are just roads and grey square buildings. And while famous sculptures can specifically be found in dedicated places, like at the National Mall in Washington, D.C., and other sculpture gardens throughout the United States, it’s more fun to find them spring up from the ground in the middle of the city.

Almost every major city has an arts center or museum, but some cities do sculpture art better than others. Below are our five favorite American cities with unique sculptures to enjoy. 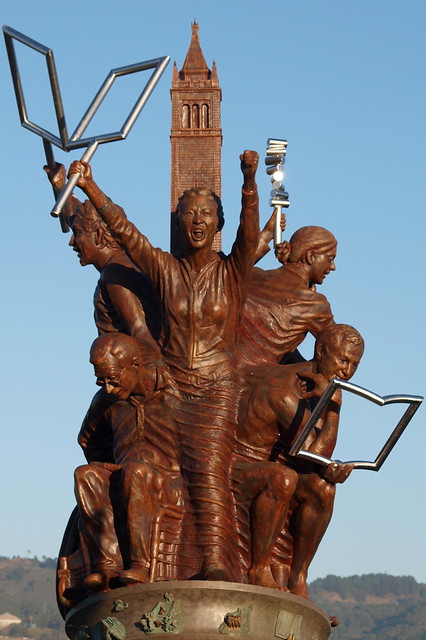 Berkeley has long been a hub for the arts, especially with the California College of Arts being just a few miles from its downtown area. Not only will you find many murals, paintings, and photography, but sculptures abound in this college town. Their public art isn’t just found at the Civic Arts Center and Addison Arts District; their sculptures are found everywhere, from the shores of Caesar Chavez Park to the downtown district.
Best of all, the city of Berkeley has done a great job of keeping a public register of all of the available public artwork. They provide a public registry, map, and lists of completed and current projects on their website. Berkeley also has a nice mixture of permanent and temporary public art projects, which makes walking through the city a different experience each time.

Springfield is home to a unique local attraction called Sculpture Walk Springfield, which bills itself as a “museum without walls”. Throughout downtown Springfield you will find about a dozen sculptures at any time, all created by great local artists. Each sculpture is unique, giving the Sculpture Walk a true museum experience by not having a collection of similar styles.

The sculptures are treated as annual “collections”, much like a traditional museum would be. Each year presents a new set of artwork, making regular trips to see them a real treat. While permanent sculpture art is nice, it’s always refreshing to see new works and it really enriches a city’s art scene this way. Best of all, because it is a “museum without borders”, this self-guided tour of the city is completely free.

If you’ve ever wanted to go to a museum and bring your dog with you, you’ll love the Public Outdoor Art Walking Tour in Chicago. This 2.7 mile easy walking trek is great for kids, leashed pets, and art enthusiasts alike. What began as a single anonymous sculpture paying homage to Picasso has grown into a 700-piece outdoor exhibit.

The Windy City has a plethora of public art throughout the city as well, such as the iconic stainless steel Cloud Gate (a.k.a The Bean) at AT&T Park, the interactive LED fountain at Michigan Avenue, and the statue of Christopher Columbus at Grant Park. Although Chicago’s food scene tends to overshadow its artwork, it’s hard to ignore how much talent lives here.

Musica statue at a traffic rotary in Nashville, Tennessee

While Nashville is known for its music and BBQ, it also has a huge public art scene. And I don’t just mean people playing guitars on street corners. The city’s Public Art program has been going strong for 16 years now, with public art found indoors and outdoors all throughout the city. The city’s commitment to the arts is prevalent, especially during Nashville’s Artober festival of music, comedy, film, and more.

The Nashville Public Art Committee has done a great job of showcasing several local art works. Not only do they receive 1% of capital improvement funds, but they continuously maintain the public pieces, keeping them in pristine condition. The sculptures run the gamut of giant animals to being inspired by food, to abstract and bronze sculptures. When you need to walk off that plate of ribs, Nashville has plenty of sculptures to see.

While South Dakota has one of the most well known public pieces of all time with Mount Rushmore, Sioux Falls has an evolving public art scene. Downtown Sioux Falls is home to SculptureWalk, an art exhibit competition with artists from all over the United States. The city gives away a combined $20,000 in prizes, and the top pieces are voted on by the public.

Sioux Falls is also implementing the Arc of Dreams, a to-be built stainless steel structure that’s going to straddle the river. The SculptureWalk stays up year-round, providing a great way to experience culture while in the heart of the rugged western terrain. Each year has incredible pieces, such as bronze depictions of rodeo riders, a playable xylophone, and many more in their collection of almost 60 unique public arts pieces.

Chris has lived all over the U.S. and enjoys traveling to new destinations. From beaches to city downtown districts, he loves to discover new places. When he's not working and writing his first book, Chris enjoys watching movies, playing video games and trying new recipes.