One of the top ten scenic drives in the United States is the Sandhills Journey Scenic Byway on Nebraska Highway 2. The drive follows roughly the path of the Middle Loup River, right through the middle of the Sandhills, covering 272 miles from Grand Island to Alliance. The Sandhills comprise an area as large as Massachusetts, Connecticut and Rhode Island combined. These gently undulating sand dunes are directly over the Ogallala Aquifer. They have been the home to humans since the first arrivals from the land bridge from Asia appeared on the scene more than 11,000 years ago. Arrowheads from that time are found regularly in the Sandhills. More recent history points to the nearly 150 settler’s scattered sod houses that dot the landscape, and the rail lines that brought more settlers and goods to the region. All can be experienced on this drive. Here is a hint, if you are traveling anytime between May and September, you may wish to consult the Nebraska State Rodeo Association to find a list of when there will be a rodeo near where you are traveling.

Begin in Grand Island, a city of nearly fifty thousand. The Stuhr Museum of The Prairie Pioneer is a great place to soak in the spirit of the trip you are about to enjoy. It is as if you have come upon an old prairie village, with many quaint shops, indoor exhibits, and an old sod house. Everyone who drives the nation will want to see the Lincoln Highway “Seedling Mile”. The Seedling Mile is one of three initial sections of the Lincoln Highway built in 1915 in Nebraska as part of the Lincoln Highway Association’s program to promote building the first a paved transcontinental highway. It is the only remaining original concrete Seedling Mile that has not been widened or covered with asphalt, out of the five states that constructed Seedling Miles. Also in Grand Island is the Crane Trust Nature & Visitor Center. In a city known for its great restaurants, dine at The Chocolate Bar, Whiskey Creek Wood Fire Grill or Napoli’s. Grand Island is also one of two places on the journey where you can enjoy a fast food meal at Runza, a favorite of Nebraskans. A runza is a ground beef, onions and cheese mixture baked in a roll. If you have one here, you will want another one when you get to Broken Bow. Movie buffs will recall that Henry Fonda was born in Grand Island. 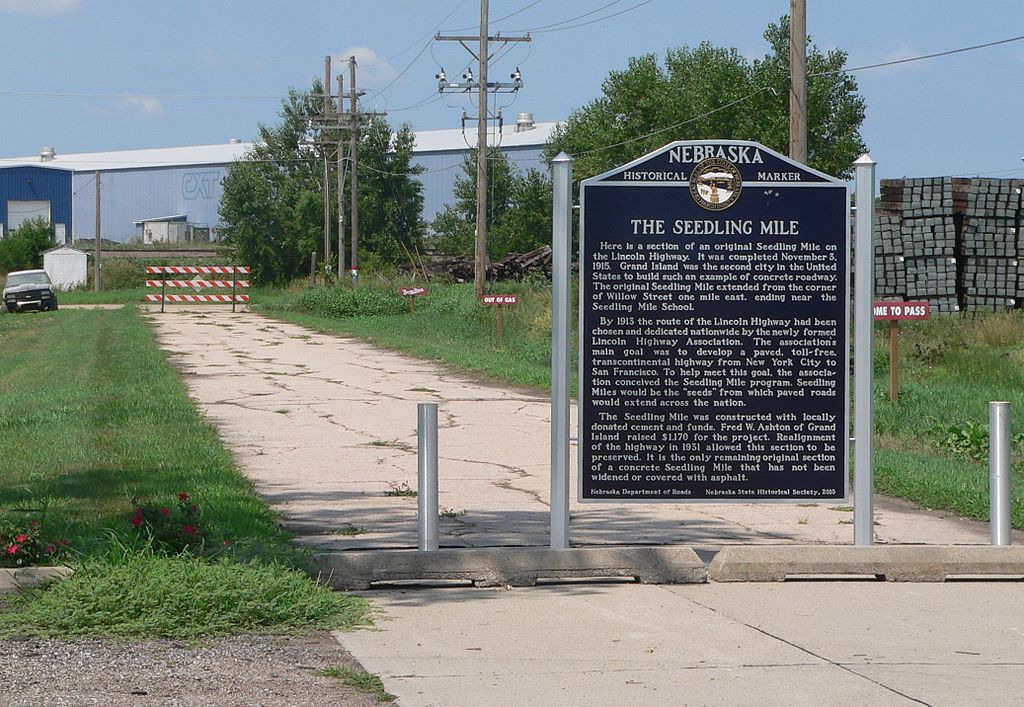 By Ammodramus (Own work) [CC0], via Wikimedia Commons

At the village of Cairo (like most of the towns on this drive, founded when the railroad arrived, in this case, in 1886) the big news is the photo op at the camel and pyramid welcome sign; see if you can capture the grain elevator in the background. The town perpetuates its Egyptian theme in many of its street names. The Watering Hole is a former creamery and doctor’s office.  By the way, the town’s name is pronounced Kay-row, not Khi-row.

After a hint of Egypt in Cairo, you will be all set for a smidgen of Italy in Ravenna, a low-slung prairie town known for its Andy Hardy type charm and the Ravenna State Recreation Area. Hungry? Have a bite to eat at the Flash Back Neighborhood Grill for chicken teriyaki sandwich, or wraps, salads and burgers. Their eggs Benedict are also yummy. From Ravenna you can jog northward to enjoy the Sherman Reservoir State Recreation Area, or continue westward along Route 2 toward the town of Litchfield, which is comprised of just twenty streets laid out in a grid pattern, intersected diagonally by Route 2 and the railroad tracks. The Swagger Saloon and the Town and Country Bank on Main Street are the local landmarks, if you don’t count the water tower and the two dogs who love riding around town on the back of an ATV.

The Sand Hills region has its own cuisine. Fortunate indeed is the traveler who has a chance to sample some of its specialties including: Sand Hills Chokecherry Jelly, pickled plums made from native Nebraska wild fruit, Swedish flatbread, upside-down apple tart, Bohemian kolaches, Danish meat roll, and biscuits made delicious with chilled butter and heavy cream. If you find any of these on the menu when you stop for a meal in the Sand Hills, be sure to try them. Also, while on your drive, be sure to try a Runza at Nebraska’s favorite chain restaurant.

Mason City has another neat old main street complete with a pair of old bank buildings, the post office and several shops with ghost signs that any photographer would love. A few miles further along you will come to Ansley. As you travel this area, keep in mind that Custer County is known as the “Sod House Capital of the World”. If you detour by taking 183 18 miles north and turn right on to Main Street (21C) then right again down Oak Grove Road, you can visit the completely restored Dowse Sod House outside the village of Comstock, at 80560 Oak Grove Rd. If you love antiques, go the extra few miles north on 183 to Sargent, the Antiques Capital of Nebraska, for L. C. Abbot Antiques, Amish Lifestyle Furniture, the Cottage Chock-Full, Trucklode Collectibles, The Livery Stable, EarthJunk’s two locations, and more. You will be glad you did.

Continuing along Route 2, next comes Broken Bow, a small city, which is home to the Bonfire Grill and Pub, and the Prairie Grounds Café, as well as a cluster of prairie style historic buildings such as the Custer County Court House, the Arrow Hotel built in 1928, the Carnegie Library (1914), the old CB&Q Depot, and the Baptist Church. Broken Bow also boasts the Visitor Center for The Scenic Byway, admission is free, at this worthwhile stop. The Custer County Historic Museum is also in Broken Bow. Remember to have a Runza here. The highlight of Merna is the 1917 the Brenizer Library, important for its association with the promotion of education and architecturally significant, built in the Prairie Style. Anselmo is home to Chandler Sandhill Honey. Find some history here, too, at the abandoned Opera House, Historical Jail, and in-between them, the Sod House; all three are photo-worthy. Dunning sits on the south bank of the Middle Loup River. The old bank building houses the Sandhills Museum.

Halsey serves as the gateway to the 20,000 square miles of Nebraska National Forest, the largest hand-planted forest in the United States. It is a great surprise for many to find that the rolling sea of grassland gives way to this vast pine forest, situated between the Loup and Dismal Rivers (which are both tubing-worthy). Take time to climb The fifty-foot Scott Lookout Tower between Memorial Day and Labor Day, with advance reservations by calling (308) 533-2257. The view is magnificent. Among the wonders of the forest is the herd of bison. The Forest also offers the best mountain biking trails in Nebraska. For a meal in Halsey, visit The Double T Bar and Steakhouse.

Thedford is in the heart of the Nebraska Sandhills, while there, you may see an eagle flying overhead. The Lonely Grill is a newer restaurant that is garnering a following for their delicious steaks. A side trip from Thedford is north on 83 to the Valentine National Wildlife Refuge, a Sandhills prairie dotted with lakes and marshes. It is a good place to look for wildlife and waterfowl. The largest railroad bridge in Nebraska is just east of Valentine, now part of a bike trail, soaring 150 feet over the Niobrara River. 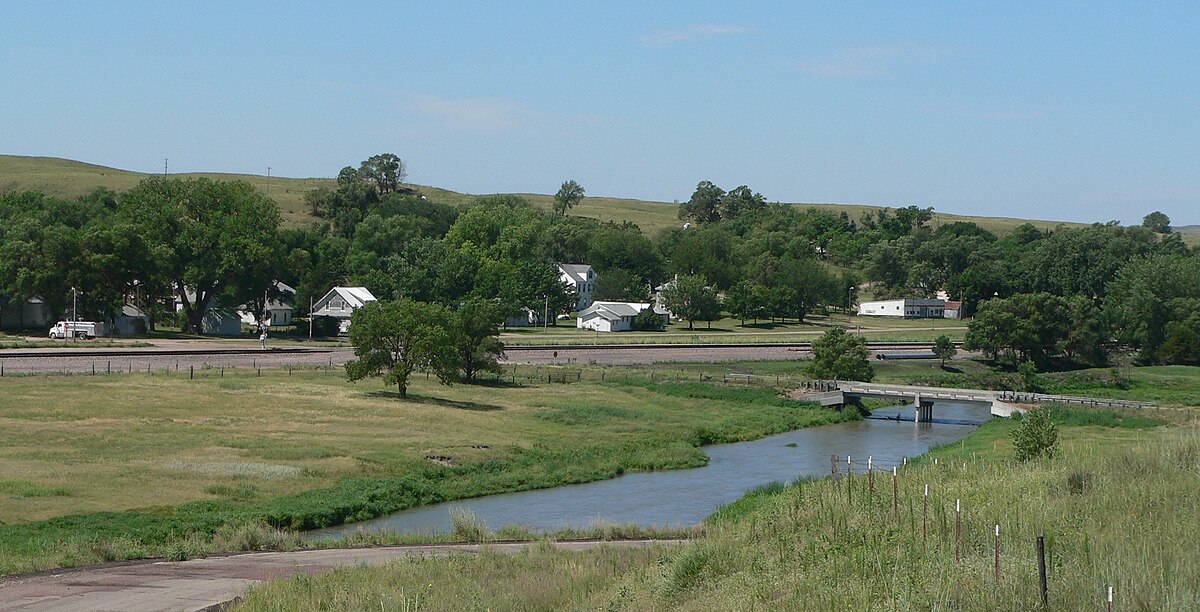 “Seneca, Nebraska from SE 2” by Ammodramus – Own work. Licensed under Public Domain via Commons.

Continuing west on NE-2 to Seneca, as the road plays a scenic game of hide-and-seek with the bends of the Middle Loup River. Keep an eye out for wildlife, and for folks enjoying the river. Then, you are alone with the sand hills, in an undulating landscape. Tiny Seneca has a population under 40; look for the old gas station and the commercial buildings many of which look much as they did in the 1880s. With a history going back to prairie settler days, Seneca officially voted itself out of existence this year; the residents just couldn’t manage to work together. The sandhills continue to surround you as you move on to Mullen, the Hooker County seat; the commercial district is on NW 1st Street.  The Nebraska Pantry offers hearty Nebraska breakfasts made with bacon, sausage, eggs, pancakes, waffles, biscuits and gravy, as well as daily lunch specials. Are you a golfer? The Sand Hills Golf Club and the Dismal River Golf Club are both top-rated golf courses in Mullen.

Hyannis is known as the center of “God’s Cattle Country”; it is the county seat of Grant County. Ellsworth is home to the Old Spade Ranch Store, established in 1898, now known as Morgan’s Cowpoke Haven. You just have to cross the tracks and stop and experience this genuine general store. It’s got hitching posts and a horse with a buggy behind out front. Inside it is filled with things you didn’t know you needed and decorated with antiques. Antioch was a potash producing boomtown during World War I. It is now mostly a ghost town.

Alliance is your ending point on the Nebraska 2 Scenic Highway journey; the commercial district is on the National Register and a highlight is the polychrome exterior of the 1938 Art Deco Alliance Theatre, where you can still take in a first run movie today. Dobby’s Frontier Town lets you go back in time to the early 1900s, to see what life was like for the settlers of the plains, at the general store, post office, bootlegger’s cabin and baled straw house. In Alliance, visit The Knight Museum, and Sandhills Center. For a quirky treat, travel north out of town to Carhenge, a replica of Stonehenge made out of vintage cars and trucks; it is just 3 miles North of Alliance, on Highway 87. For a meal in Alliance, dine at Ken and Dales, Newberry’s or the Homestead Diner.

If you have a bit more time, go just a way down 385 to Chimney Rock National Historic Site. And if you go that far, why not head further west to dramatically impressive Scottsbluff.

Jay is a writer living in Central Florida, with his wife Judy. They enjoy traveling by car, and Jay normally chooses to go the scenic route. Antiquing is a lifelong avocation, so anytime a sign says “Antiques” his car tends to veer off in that direction.

Escape to the Northwest in Hood River, OR