One thing that road tripping Americans know to be true is that there are some long stretches of driving across the country. Sometimes, you just want to get out of the car and stretch your legs. That’s where some of our favorite places to take a break from the road come in: giant roadside attractions!

Our friends at Homes.com looked through Guinness World Records and other websites to put together a few maps with larger-than-life attractions across the U.S. From the most iconic World Record attractions in each state to the 23 states competing for the World’s Largest Chair, they’ve got you covered when looking for a great photo op on your next road trip.

Below, we’ll share where you can find 6 cities with a giant coffee pot attraction across the U.S. For the rest of the maps, you can check out The Best Roadside Attractions By State!

While this big coffee pot may not be the largest (standing at just over 7 feet tall), it may have the most interesting lore around it. The pot was originally created by two brothers who were tinsmiths to advertise their business back in 1858. As a landmark created before the Civil War, there are a number of fascinating urban legends and stories surrounding the pot. 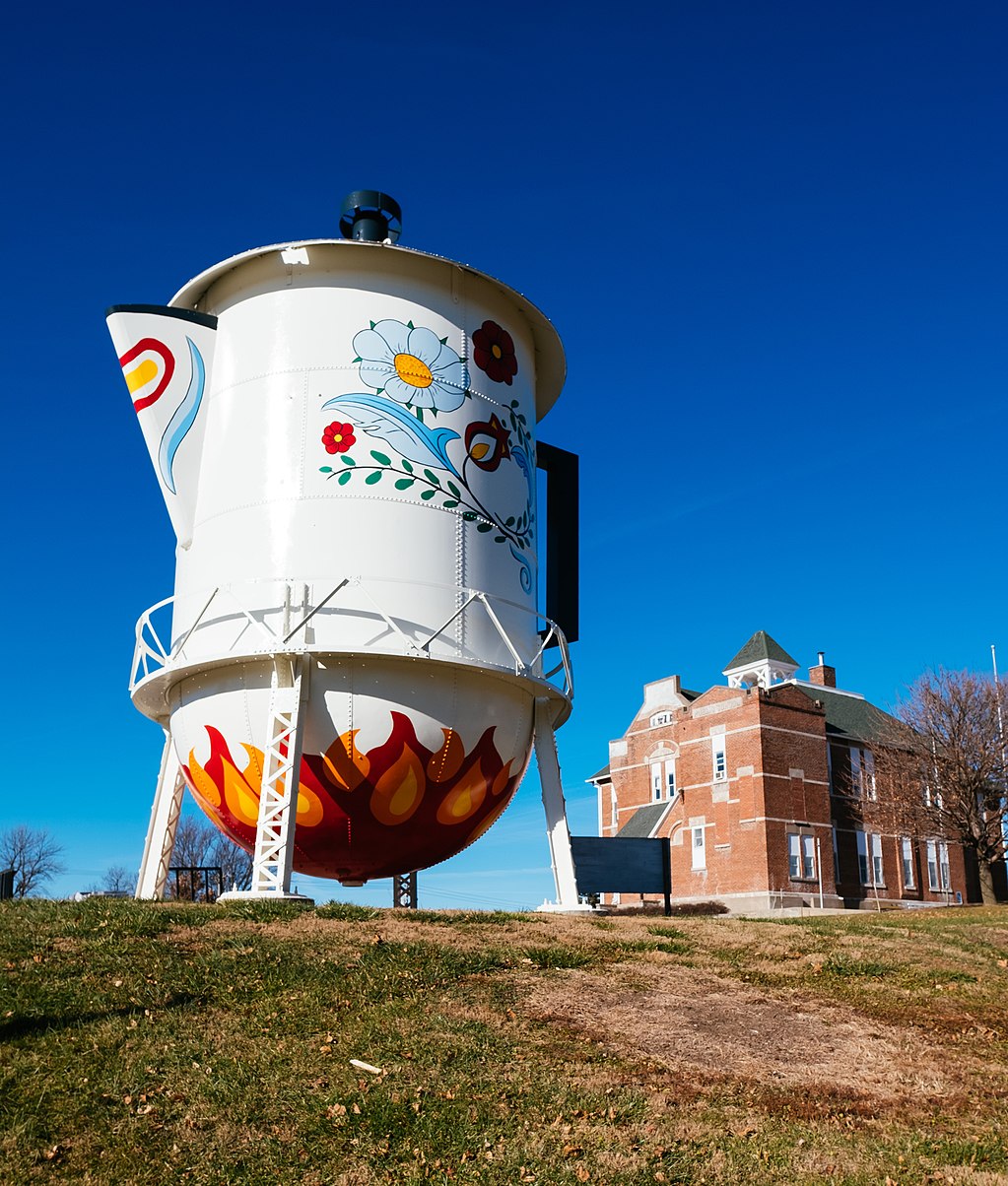 Stanton’s water tower stood proudly since 1914. In 1970, the city decided to add a handle, spout, and new paint job to make it look like a Swedish coffee pot. In 2015, the city needed a larger tower, so the coffee pot was moved to the grounds of the Swedish Heritage & Cultural Center, where it sits on shorter legs. But all of the Scandinavian influence not lost – the new water tower was fashioned to look like a Swedish coffee cup.

Kingsburg was founded in the 1870s by Swedish immigrants, and in the 1980s, the town wanted to honor its heritage. Of course, they did so by styling their water tower after one of Sweden’s favorite drinks.

This circular building with a spout and handle was built in 1959. It has served as a number of businesses, from a restaurant to a gas station to a fish market. Most recently, it was purchased by an artist as a studio, gallery, and living space. It was again sold in 2018. You can still stop by to take a picture of the exterior until the next venture moves in.

Bob’s Java Jive has a rich history that makes Tacomans proud. Today, the Jive is kind of a dive, but it’s still worth a visit for a cold drink, karaoke, and to learn more about the history. The building was constructed in 1927, and has been a landmark during every era. It had a secret room for drinking and gambling during prohibition; the Wailers performed here regularly before their song Louie Louie became a nationwide hit; it can be seen in the background of scenes in the 1989 hit movie Say Anything. While this venue may have seen better (or rowdier) days, it’s well worth a visit.

This 18-foot tall coffee pot once served lunch, gas, and coffee to locals and travelers on Highway 30. Built in 1927 and once a thriving business, this beloved Bedford landmark sat abandoned in the 1990s. The Bedford County Fair Association and a highway preservation group worked together in 2003 to move the building and spruce it up to the attraction it is today. While you can’t get a cup of joe here anymore, it makes for a great stop to read the sign about its history and take a quick picture.

Amber lives in Orlando and loves to travel through Florida and the south. You can usually find her crafting or hanging out with her rescue dog at a local craft brewery.

Bastille Day in the U.S.A.